Here is a little ditty about why it is great to have a Falcon rear vented oven.

I thought it would be a great idea to cook up some apple crisp chips using a few that had been sitting around looking lonely for several weeks. I googled a recipe for apple chips (the type that are as thin as Pringles!), turned my oven to pre-heat at a lovely hot 220°C and set to peeling, slicing, and laying out my apple chips in single layers across multiple trays.

After a sprinkle of cinnamon across the top, I popped them into the oven for the suggested cooking time of 45 minutes (they need to be crisp right!) and set about my merry way completing other household tasks. As I was cooking apples and they contain lots of moisture, I switched my Falcon rangehood on a low extraction setting, to draw the steam out of the kitchen, which would inevitably escape via the rear vent.

About 15 minutes into my cooking adventure, I did a quick spot check to see how they were coming along. The anticipated steam was flowing nicely, extracted into the big wide world by the rangehood. The cooling fan had kicked in due to the oven temperature and was distributing coolish to warm air out the front top of the oven, to ensure my control knobs and fascia remained suitable to touch.

At about 30 minutes my nose was alerted to the smell of charcoal coming from the kitchen. Upon racing back in, I could see plumes of smoke rising out the rear vent at the back of the oven. And after just a few seconds panic, a light bulb appeared above my head and I thought to myself ‘thank the powers that be my Falcon oven is rear vented’!

Why was I excited because it is rear vented you ask? Because I immediately ran over turned my oven off and pushed the rangehood lever to full extraction on my Falcon rangehood, resulting in the endless stream of smoke being sucked straight from my oven out of my kitchen, into the outside world. Had my range cooker been front vented, the curls of smoke would have been drifting into the kitchen, making it much harder to extract the smoke and smell from the house.

I left the oven door closed and the rangehood running full speed, until the smoke trail dissipated from the back of the oven – meaning my house did not end up smelling like a smoke house. Eventually I retrieved the extremely blackened apple chips that were indeed very ‘crispy’ and they went straight to the outside bin.

The moral of the story?
Always buy a rear vented free-standing range cooker. Whilst the oven door is closed majority of the moisture, odour, steam, and air borne grease particles from cooking escape via the rear venting, moving straight up and out via the rangehood above. Depending on the food being cooked, it is of course natural for steam to escape via the front door when this is opened during operation. Unlike front vented ovens where it is continually being vented back into the room during operation, even with the door closed.

The other moral of the story? Never trust a google recipe that tells you to cook thin apple slices for 45 mins on 220°C 😊 Unless you want charcoal apple chips of course. 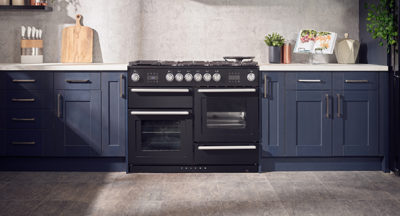 Full Steam Ahead With Falcon

08/28/2020
Falcon
Falcon continues to extend its range of cookers and is leading the way in innovation with the introduction of the Nexus Steam 110cm – Australia’s first range cooker featuring a dedicated steam oven.  This is one of...
READ MORE 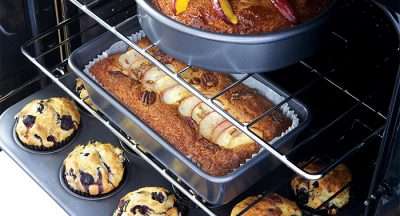 08/21/2015
Falcon
Your oven has just baked its last cake… finally it has been called to meet its maker after years of providing you and your family with countless meals and maybe a few desserts! How hard can it be to buy a new...
READ MORE 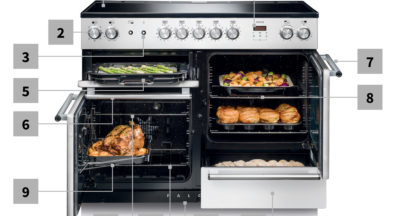 02/06/2018
Falcon
Falcon have a sensational new upright range cooker - the NEXUS.  Available in both dual fuel and induction, plus 90cm or 110cm. Here are thirteen (13) key features you need to know about the Falcon NEXUS...
READ MORE